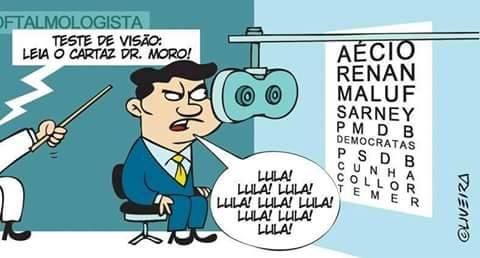 After hours of expectation and the dust having settled on Lula’s possible release, some points:
Regardless of the result, it was a masterly defence. Fact.
In a single movement they managed:
1. To put Lula top trending worldwide and on the cover of the leading international media outlets. They got him out of being forgotten in the dungeons of Curitiba. Lula is alive and well, to the fright of the nihilists and despair of the coup plotters.
2. They mobilized the activists on this post-World Cup Sunday. These activists had been kind of lost and withered after the defeat of Brazil, and needed to be shaken up. Demonstrations throughout Brazil and next week too.
3. Moro and company revealed, they took the bait desperately all the way to the stomach, as usual.
4. They exposed the whole Brazilian judicial system and its habitual Godfather ways more entrenched than ever post-coup. An international embarrassment.
5. The corporate media were shown to have no clothes, in their ridiculous role and failing credibility.
6 . They constructed a new fact for a further undertaking in the Supreme Court. The obvious partiality against Lula made blindingly so for those who want to see and becomes a new political and juridical fact.
There was a victory. They were geniuses! We moved the board, we got ourselves off the ropes. And they were in despair. Rightly so. They can already feel the signs.
The spring must come.
And I’m going to die laughing, that day is coming sooner than you think.