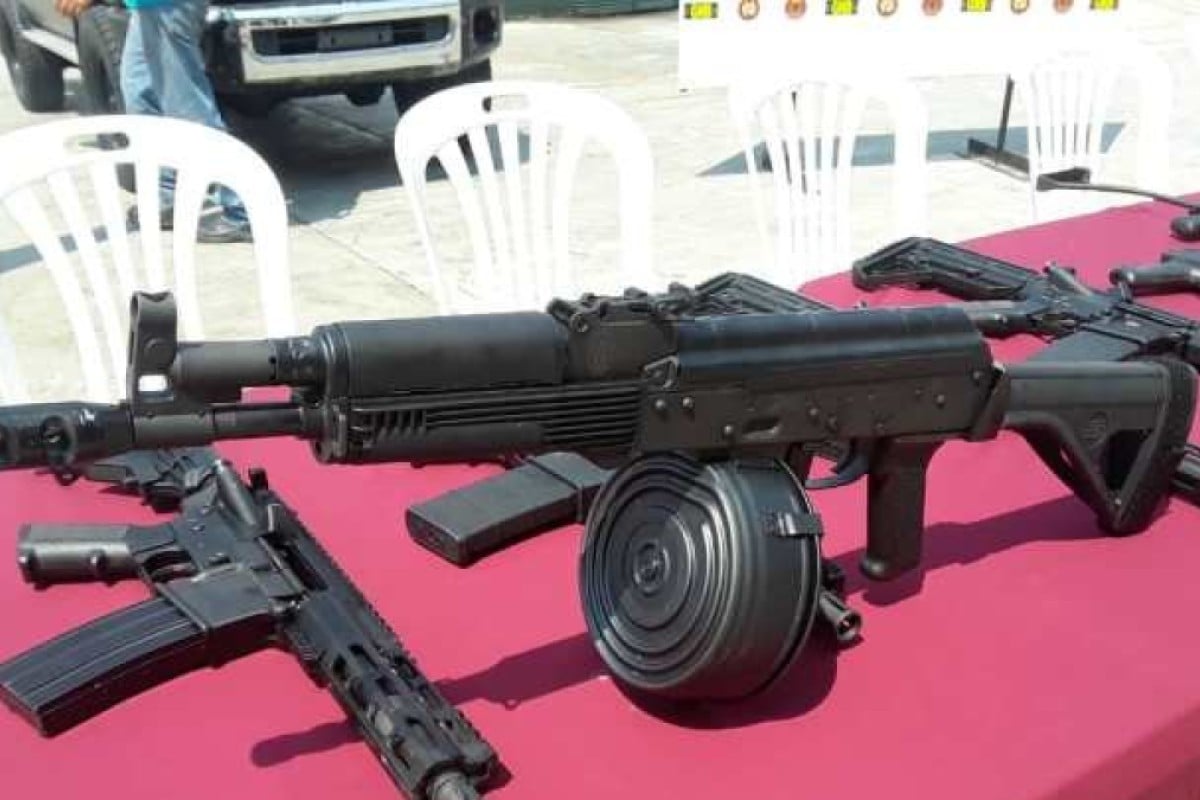 Venezuelan authorities say a US-owned air freight company delivered a crate of assault weapons earlier this week to the international airport in Valencia to be used in “terrorist actions” against the embattled government of Nicolas Maduro.

An air freight company, 21 Air, based in Greensboro, North Carolina, operates the Boeing 767 aircraft the Venezuelans claim was used in the arms transfer. The flight originated in Miami on Sunday.

The Boeing 767 has made dozens of flights between Miami International Airport and destinations in Colombia and Venezuela since January 11, a flight tracking service shows, often returning to Miami for only a few hours before flying again to South America.

The discovery of the weapons was on Tuesday – two days after the flight landed briefly in Valencia, Venezuela’s third-largest city – as tax authorities and other inspectors conducted a routine inspection of cargo from the flight, according to a statement by the Carabobo state governor’s office.

“This materiel was destined for criminal groups and terrorist actions in the country, financed by the fascist extreme right and the government of the United States,” Palencia Ortiz was quoted as saying.

The freight company, which started five years ago, operates two cargo planes, a Boeing 747 and a Boeing 767, according to the 21 Air website. The Boeing 767, a 32-year-old aircraft once flown by the now-defunct Brazilian carrier Varig, carries the registration N-881-YV and is the aircraft that landed in Valencia on Sunday.

The company did not immediately respond to a request for comment sent through its website. The mobile phone of the company’s chief executive, Michael Mendez, had a recording on Thursday afternoon that said it could not accept calls.

An Ottawa, Canada-based analyst of unusual ship and plane movements, Steffan Watkins, drew attention to the frequent flights of the 21 Air cargo plane in a series of tweets on Thursday.

“All year, they were flying between Philadelphia and Miami and all over the place, but all continental US,” Watkins said in a telephone interview. “Then all of a sudden in January, things changed.”

That is when the cargo plane began flying daily to destinations in Colombia and Venezuela and sometimes several times a day, Watkins said. The plane has made nearly 40 round-trip flights from Miami International Airport to Caracas and Valencia in Venezuela, and Bogota and Medellin in Colombia since January 11.

The most recent tracking of the aircraft showed it arrived from Medellin into Miami airport after midnight on Thursday.

The air cargo company’s website says the Boeing 767 has a payload capacity of 42 tons.

The aircraft in question has passed through many hands since Varig took delivery of it in 1987. In 2004, it was passed to GE Capital Aviation Services, a leasing company that is part of the General Electric conglomerate, according to an operator history on the planespotters.net website. Tampa Cargo, Avianca Cargo and Dynamic Airways later controlled the aircraft until 21 Air received it in 2014.

The provenance of the alleged weaponry was not apparent. And questions about who the arms shipment was destined for, if the Venezuelan version of events is true, only mounted. Delivery at a commercial airport would indicate somebody with authority there would have had a hand. Venezuelan authorities displayed the weaponry they said was delivered by the 21 Air cargo plane on open-air tables draped in red cloth. Some of the rifles included stands for long-range targeting. The shipment included 15 AR-15 assault weapons, a Micro Draco semi-automatic pistol with a jumbo magazine, a Colt 7.62 rifle and two telescopic sights, the governor’s statement said. 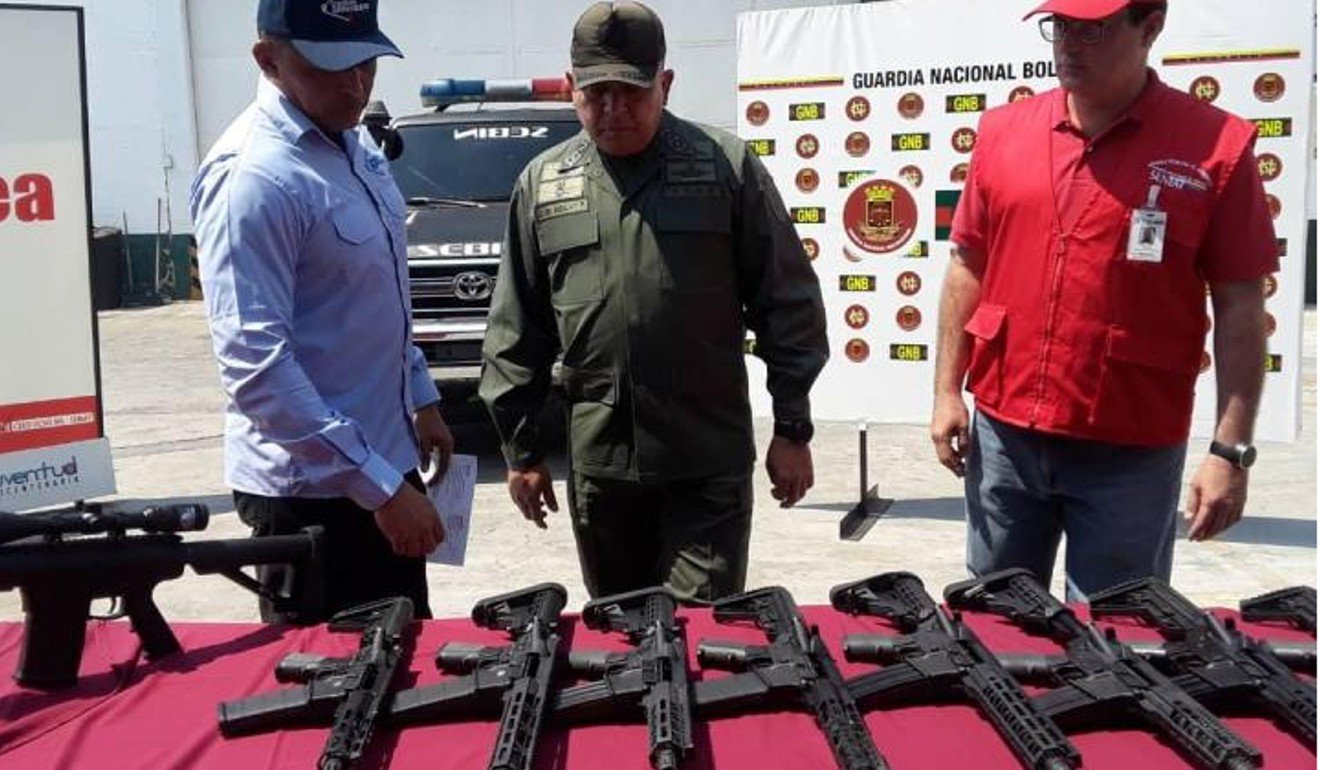 Valencia was a former manufacturing and economic hub before the collapse of the nation’s economy.

Flight records from the tracking site flightradar24.com, monitored by Watkins, indicate the 21 Air cargo plane flew at least four times to Valencia from Miami and another four times to Caracas from Miami since January 11. In many cases, the flights would head on to Bogota or Medellin before returning to Miami.

If a US entity was trying to provide arms to a Venezuelan resistance movement, it would be taking a familiar page from the history books.

The CIA operated a dummy airline, known as Air America, from the early 1950s until the mid 1970s for air operations in Southeast Asia, including airdropping weapons to friendly forces.

More than a decade later, Sandinista soldiers shot down a cargo plane taking weapons to the US-backed Contra rebels fighting the Nicaraguan government. A US Marine veteran, Eugene Hasenfus, survived the 1986 crash and told reporters he was working for the CIA, paving the way for his release and return to the United States.

Curiously, one of the figures in the Ronald Reagan administration instrumental in delivering support to the contras, former assistant secretary of state Elliott Abrams, was named by President Donald Trump late last month as his special envoy overseeing policy towards Venezuela.

This article appeared in the South China Morning Post print edition as: Plane from Miami brought arms for ‘terrorist action’